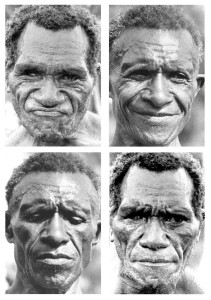 Fore tribesman, studied by Paul Ekman, discerned by Tomkins to be peacable.

Silvan Tomkins deserves much of the credit for the renewed interest in facial expression which has developed in the last two decades. His affect theory emphasized the importance of the face, providing a new conceptual framework for considering expression and emotion. It was a framework for which emphasized the role of biology and which conceived of emotion in terms of eight discrete, quite different affects, rather than two or three affective dimensions. At the time Silvan first wrote about the face, the only other psychologist publishing on expression was Harold Schlosberg, but his approach to expression–trying account for judgements in terms of a few underlying dimensions–did not awaken the interest of many others. Unlike Schlosberg, (who told me he never looked at the faces showed to the judges), Tomkins was fascinated by faces themselves. He was an extraordinarily keen interpreter of expression.

Tomkins’ publication in 1964 with McCarter had little direct impact on the field of psychology, then or now, but it had an enormous impact on me. It is amazingly rich in theoretical ideas . . . so many and sometimes presented in such an offhand way that it is easy to forget or miss some of them entirely. Some of these ideas he developed at length elsewhere; others are ideas which appear only here and were never fully developed. In a conversation with Tomkins some fifteen years after the publication of this article, I found that Tomkins himself had forgot some of the ideas he mentioned here.

Here is a brief listing of the theoretical points:

I learned of his 1964 article before it appeared through the good offices of the editor of Psychological Reports, Carol Ammons, who informed Tomkins and me that we had each submitted articles on related topics and should get in touch with each other. We first corresponded and then met. Three years later I undertook cross-cultural studies of facial expression to test Tomkins’ ideas, and he helped me pick the photographs which I was to show in both literate and then preliterate cultures.

From my account of Tomkins’ first visit to my laboratory:

I remember very clearly the time when Silvan opened my eyes. It was 1966. Wally Friesen and I had spent a few hundred hours examining films . . . of two stone age cultures in New Guinea–the Fore, whom I visited the next year, and the Anga. Since we saw no expressions which were unfamiliar . . . this was our first glimmer that expressions might be universal. But we worried that our interpretation might be biased by what came next in the film. As a check we asked Silvan to look at portions of the film. We did not tell him anything about either culture, and we did not let him see any contextual information, just isolated expressions.

Silvan judged the expressions correctly in that the emotion he saw usually fit with what came before or afterward. When we asked him what his impressions were of these two cultures, he performed what seemed almost an act of magic. One group he said seemed quite friendly. The other he suspected were explosive in anger, highly suspicious if not paranoid in character, and homosexual. It was the Anga tha Silvan was describing, and his account fit what we had been told by [the researcher] who had worked with them. They repeatedly attacked Australian officials who tried to maintain a government station; they were known by others in New Guinea for their fierce suspiciousness, and they led homosexual lives until the time of marriage! A few years later an ethologist literally had to run for his life when he attempted to work with them.

After that meeting with Silvan I decided to devote myself to developing an objective way of measuring facial behavior to make available to anyone what he could see.

For more from Paul Ekman: