In New South Wales, Australia, when people are referred to the Goulburn Family Support Services (GFSS) they always get a basic education in Silvan Tomkins’ theory of affects. “We started doing this in 2002 and have found it to be a key element in our clients’ success,” said Matt Casey, Chairman of the Management Committee. 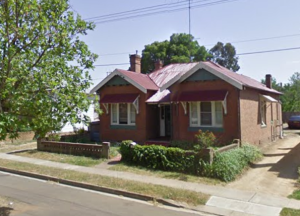 for safety planning to determine how the abusive behavior can be stopped and the relationships in the family repaired. “Initially we imagined we would run restorative conferences for the women and their families, including the abuser,” said Casey, referring to a specific type of meeting involving all parties in a traumatic event and intended to surface multiple perspectives and feelings to promote mutual healing. “For a range of reasons, including the fact that many of our clients didn’t have strong family support, we found that it was not possible to run the conferences.”

So the team at GFSS looked for ways to get the benefits of a restorative conference from one-on-one interactions with the women and their partners. They knew about Silvan Tomkins’ affect theory, and “it became obvious to us that this theory underpinned everything we know about restorative justice,” said Casey. And they decided to use the theory as the basis for transforming the way clients and their partners manage their emotional lives.

Tomkins’ theory is introduced to clients after the initial interview where their story is heard and their immediate needs are met. GFSS workers explain the nine innate affects while asking clients to consider their own experience with each affect and emphasizing the biological origins of these specific feelings. They then work Socratically with the clients to create Nathanson’s Compass of Shame, which describes four ty

pes of reactions to shame experiences:  withdrawal, avoidance, attack other and attack self.

GFSS workers then encourage clients to reflect on their story in light this new understanding of what affects are and how they work. This reflection on the affective aspects of their story is facilitated by the restorative justice question script developed by Terry O’Connell. Casey described the value of using these questions. “We found that this script enables people to provide both factual information and express emotion in a manner that allo

According to Casey, this method of engagement very quickly establishes a strong therapeutic relationship between the worker and the client, the strength of which is one of best predictors for a positive outcome. “When a person is given the opportunity and language to share their emotions, they feel that they are being listened to as a person, and there is a level of intimacy that often takes a long time to establish.”

This sharing and mutualizing of emotion can reduce negative emotion and increase positive emotion. Some clients have never had the language to describe how they feel. “My colleague, Bill Curry spoke to a couple who sought his assistance,” said Casey. “The couple described the emotional impact of their conflict. At the end of it, one of the clients remarked that she had never heard her partner describe his emotions in the way that he had. When Bill asked him about this, he responded, ‘You are the first person that has asked me the right questions.’”

A handout was developed, called The Tools of Life, which includes the nine innate affects, the Compass of Shame, the restorative questions, and the social discipline window (see illustrations). The handout provided clients with a tangible diagram and a language to identify and describe their emotions and locate where they find themselves on the Compass of Shame at any time. “A number of families placed the handout on the fridge as a ready 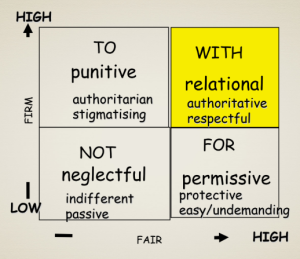 reckoner to where they were emotionally and how they could move on,” said Casey. “Another client had the Compass of Shame taped to the dashboard of his truck.”

Over time, after working with thousands of clients, the team at GFSS have come to realize that the knowledge included in The Tools of Life enables people to manage their response to tension in everyday life. Says Casey, “It is the same way that an athlete is trained to identify the muscle and body movement necessary to participate in their chosen sport. When things go wrong, clients are able to identify the emotion with a high degree of accuracy and to adjust their behavior to resolve conflict, repair harm, and strengthen relationships.”