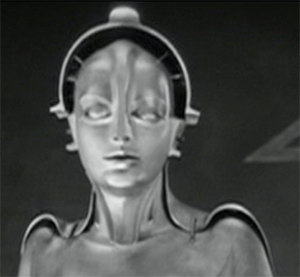 In the late 1930s I was seized with the fantasy of a machine, fearfully and wonderfully made in the image of man. He was to be no less human than automated, so I called him the humanomaton. Could one design a truly humanoid machine? . . .  One could not engage in such a project without the concept of multiple assemblies of varying degrees of independence, dependence, interdependence, and control and transformation of one by another . . . It was in this general conception which, one day in the late 1940s, resulted in my first understanding of the role of the affect mechanism as a separate but amplifying co-assembly.  (Exploring Affect p. 32)

As Tomkins considered the ways in which the affect system is involved with our response to the stimuli of the world, and how we form theories about how the world works, script theory emerged. Of critical importance was the question of how something is remembered and combined with other memories to make meaningful predictions. It’s not enough that we experience and respond to life. We need to remember, predict, seek and avoid new experiences.

But the dominant theories of personality fell short of providing an explanation. For example, the behaviorist approach which reduced everything to stimulus-response didn’t explain how things came to be valued. 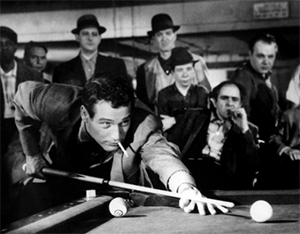 A cue ball, hit by a pool cue, strikes the eight ball, which goes into the pocket. Neither the cue, the ball nor the pocket remember what happens, nor form any theory about what might happen should the same operation be tried again.  But the pool shark has a rich affective experience as he undertakes these actions—interest in noting the exact force he uses to strike the ball, fear that the beautiful woman watching might scorn him if it doesn’t go in, excitement at the thought of the winnings and what he can spend it on, and satisfaction to see the ball go in. The affective quality of the experience, the feelings both good and bad, and mechanisms such as cognition and memory, enable storing, retrieving and making conclusions about the experiences.

Scenes: the basic units of experience

Tomkins called the basic unit of experience a scene; it is made up of Stimulus–Affect–Response, or SAR. Multiple similar scenes are often bundled together and the patterns and rules that emerge from them, he called a script. Scripts are the theories that allow us to move through life toward rewarding affect and away from punishing affect. Their role in our cognition is to yield the most predictive and explanatory bang for the buck possible. “Human beings, like any scientist, attempt to explain as much of the variance as they can with the fewest possible assumptions.”

Here are the general feature of scripts:

Here are some examples:

The baby awakens, feels hunger, and begins to cry with distress. A loving parent comes in, soothes the child, picks her up, and feeds her. As the steady stimulus of hunger decreases, enjoyment-joy results, and she is content and smiles. Like all affect, the smile of joy is contagious, and the parent is rewarded by it and smiles back. Baby and parent spend some time playing, gazing at each other and vocalizing, moving back and forth between interest-excitement and enjoyment-joy. Eventually, the baby sleeps. This cycle is repeated many times per day, for many weeks. The baby is hungry and awakens, crying her distress. A parent appears at the doorway. The baby smiles. That baby has formed a script. Before anything is done to reduce the distress of the hunger, the baby smiles. Out of awareness, she has “learned” that “parents make me feel good.” She doesn’t actually say that to herself; she just “knows” it emotionally.

A Labrador retriever gets excited whenever she sees her owner take the shotgun out of the closet. The dog has learned that when the gun comes out, something exciting will soon follow. Hunting is an intensely exciting activity for this dog.

A fifth-grader has had difficulty with reading for years. His learning problem has not been evaluated. Repeated scenes of failure, embarrassment in front of other children, and being bullied by others who call him “stupid” have resulted in a strong emotional reaction to anything having to do with school. The thought of school triggers shame, distress, self-disgust and intense fear. Then a compassionate teacher finds some strategies that work for the student. She is supportive, praises his efforts, and gently guides his work. Her behavior and affect convey respect and the belief that he can be a good student. He feels a bit more hopeful. In addition, this classroom is a place where those who bully are held accountable for their behavior and have to work with others to heal the harm they have caused. The student gradually loses some of his fear and distress and makes a few friends. He begins to be more interested in school and to enjoy it more. His script of school failure has begun to undergo revision.

Thus scripts, in their infinite combinations, conditions, and revisions, provide a way to examine and understand human personality and behavior in ways that are at once specific and fluid. Tomkins makes no claims that his script theory can actually describe reality, only that we can use its structure as a means to possibly better describe that reality. Tomkins says that any script theoretical description is “inherently too abstract or too particular, too analytic or too contextual to finally converge on the reality of our concern, but it is also capable of approach closer and closer to convergence on that reality . . . ” (Exploring Affect p. 338)

He said that understanding scripts and their modularity would change the way we look at personality. It would render moot many controversies over traits, cognitive, perceptual, behavioral, affect, drive, and other issues, which need to be incorporated into any model.

As an example he highlights a commonly discussed personality trait, optimism. To show how difficult it is to describe a personality as “optimistic,” he emphasizes that the rules governing whether or not a person is optimistic are dependent on other rules which respond to variable unscripted information. He explores this at length, saying that such a thing as optimism is controlled by scripts that might be partitioned based on whether or not the person is “alone or with others; or with elders or with peers; or with large groups or with small groups; or in intimate or distant interactions; or with same or with opposite sex; or with angry scenes or distressing scenes; or in the past or in the present or in the projected future; in his home town or away; or when he is reading or . . . when he is imagining; or when he is with his family or at school . . . or when he is reaching for the moon or for more reachable goals or for very modest goals; when he is single-mindedly pursuing one goal or two or many . . . ”

In other words, when one script comes to the fore, it impacts how other scripts run. Understanding which rules are the most consequential is, in Tomkins understanding, the major question of any theory of personality. The advantage of script theory is that provides a framework for understanding the rules that have the most governing power over a person. The paradigm is sufficiently powerful to accommodate and explain the enormous variation among people. It keeps us from falling into the trap of prematurely closing off the question of what makes a person tick.

Much more where this came from

Tomkins extends his theory to explain not just personality, but culture and ideology, by exploring different classes of scripts that govern core human concerns. For more on this see the chapter on “Script Theory” in Exploring Affect, edited by Virginia Demos.