We sorrowfully announce the death of Tomkins Institute founder, Don Nathanson. As author of Shame and Pride: Affect, Sex, and the Birth of the Self, Nathanson explained and applied Tomkins’ theories to so as to have profound and lasting impact. His work in establishing this institute and promoting Tomkins’ legacy has been an enormous gift to humankind.

A wonderful obituary for Dr. Nathanson appeared in the Philadelphia Inquirer, where it was noted that “Dr. Nathanson blazed a trail when he began to explore how emotions, especially shame, are a critical regulator of human behavior and to discern that the responses to shame can be mapped. He wrote extensively and lectured internationally on the subject.”  Click here to read the obituary.

Here is a note from Co-Founder, former President of Tomkins Institute, and good friend of Don, Vick Kelly:

To the friends, colleagues, students, and others who knew him:

Sadly I send you news of the passing of my mentor and dear friend Don
Nathanson. He had been in hospice at Bryn Mawr Hospital for several days
and passed away peacefully this morning after a long battle with
dementia and the physical aftereffects of a stroke. His death is partly
a blessing because he was a such a brilliant man but had lost the use of
his powerful intellect to illness. It is not so much of a blessing for
those of us who loved him dearly. Although she was not present at the
moment of his death, his amazing wife Roz was by his side for the many
years of his ordeal, making sure he was well taken care of. Almost to
the very end, he was able to say “I love you” to her.

The Shame and Humiliation of the Precariously Employed
An Effective Application of Tomkins in New South Wales
Tomkins and Izard: Theories Compared 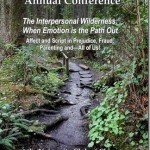